50 years since Miranda vs. Arizona case argued at Supreme Court

It’s been over 50 years since Miranda vs. Arizona was argued before the Supreme Court, a case that forever changed how police deal with defendants.

The ubiquitous warning from police that suspects have the right to remain silent arose partly from Ernesto Miranda’s now-infamous confession at the Phoenix jail on March 13, 1963, to kidnapping and raping an 18-year-old woman.

The detective who obtained it from Miranda, Carroll Cooley, has said  he believes it to be a widely misunderstood case.

In the half-century since Cooley’s involvement with the case ended, he has been cited in numerous books, articles and TV programs.

Cooley, who worked various jobs with the Phoenix police from 1958 to 1978, said at the 2013 opening of the Phoenix Police Museum exhibit dedicated to the case that he believes certain versions of the story cast the department in a bad light, suggesting the department mistreated suspects.

“That didn’t sit well with me because I knew the facts,” Cooley said.

A woman reports a rape

The facts, as Cooley related them, began on March 3, 1963, when the woman called Phoenix police to report that she had been kidnapped and raped.

As days went by, detectives were looking at a dead end. They had no leads and no clues.

A week later, a relative met the woman at a bus stop a little past midnight to walk her home after work. The two noticed something strange — a car was slowly circling the neighborhood — and the relative called police to report the license- plate number of the car, Cooley said.

It didn’t seem like much of a lead, but police checked it out. The number was listed to an address in Mesa, and detectives determined the number given must have been incorrect. It seemed like just another dead end.

The detectives decided to run another, expanded search, looking only for Packards with plate numbers starting with “DLF.” They located a car that matched the description, but the car was registered to a woman, and she had just moved. A check at the post office revealed a change of address to Mariposa Street.

At that address also lived a man named Ernesto Miranda.

“This is where it gets sticky,” said Cooley, who went to Miranda’s home that day to investigate.

After a criminal-record check, Cooley noticed Miranda had served time for attempted rape and other charges.

After Cooley and his partner arrived at Miranda’s home, Miranda voluntarily accompanied the officers to the station, Cooley said. He was free to leave and not in custody.

At this point, Cooley said, Miranda was a “person of interest” in the case.

“Seeing a car driving in a neighborhood doesn’t give you probable cause,” Cooley said.

Cooley brought the woman to the station, and she picked Miranda out of a lineup. A victim of an armed robbery from November 1962 also identified Miranda as the perpetrator in that case. 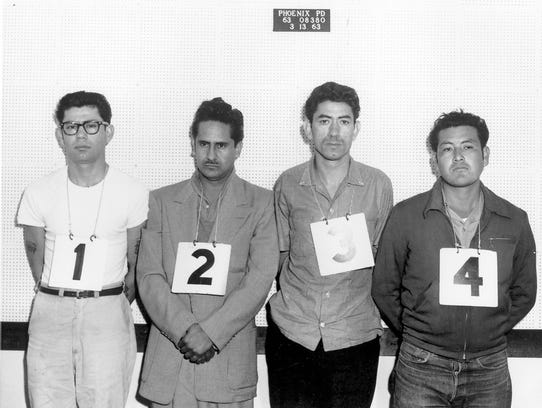 Ernesto Miranda (far left in glasses) in a police lineup the day he was arrested in 1966. (Photo: Paul Huebl)

When Cooley returned to the interview room, Miranda asked Cooley how the lineup had gone, and Cooley said he told him, “Ernie, you didn’t do so well.”

It was at this point that legal history was made. Miranda copped to the kidnapping and rape, writing and signing a confession under a heading indicating that the statement had been made “voluntarily” and with “full knowledge of my legal rights.”

A claim of not knowing his rights

Cooley said this fulfilled the legal requirements of the time. But Miranda would later claim he did not know his rights, despite signing below the heading. When Miranda’s lawyers took the case to the Arizona Supreme Court, Cooley was no longer following it.

“I had no interest in this besides going to court, getting the conviction and moving on with my business,” Cooley said.

In 1966, the Supreme Court overturned Miranda’s conviction and ruled that officers must read every arrested suspect his rights aloud.

After the decision, Miranda remained in jail on another conviction and was convicted again of raping and kidnapping the 18-year-old.

Prosecutors at the second trial didn’t use the confession and instead relied on testimony from a woman who was close to Miranda.

Miranda was eventually paroled and was fatally stabbed in a dispute during a card game in February 1976 at a downtown Phoenix bar.

Museum curator Mike Nikolin, a retired lieutenant with the Phoenix police, said the Phoenix department in the 1960s did not mistreat suspects. Nonetheless, the Supreme Court ruling helped unify law-enforcement methods across the nation.

“We’re a big country,” Nikolin said. “Phoenix was good about (fairness), but that doesn’t mean everyone was.”

The downside of the law, in Cooley’s view, was that many suspects simply stopped talking to police.”They just don’t talk to you,” he said.

At least, fewer talk as openly as Miranda did.